Artists like Paolo refuse to abandon the area. “Sometimes I get patronized when I say where I’m from. But I know what Bel-Air is worth”

The first district of Port-au-Prince developed in the middle of the 18th century, Bel-Air has today gone from a “wealthy area” to a “theater of violence and open-air massacres”. About 80% of the population fled the area, reports Paolo, by his full name Benjamin Max Grégoire, a part of the minority who still live there despite the reign of what he calls a politic of nuisance.

Also an inhabitant of this working class district, Jérome Clifford, alias Toubi, confirms the sad picture portrayed by his colleague. In the immediate vicinity of this artist, only his house is currently still standing. The rest were set ablaze during the various murderous attacks perpetrated, among others, by the gang named Krache Dife .

“After the thugs left,” says Toubi, “my brother-in-law who was there entered the house through a back door. He used the water I had inside to put out the fire that was spreading over several pieces of furniture, such as the table, and thus managed to save everything ”.

Like Toubi, Paolo is a plastician. And like all other artists in the field, working conditions tend to become more and more difficult. Stores are failing to function. Those who do, cannot place orders. And due to the volatility of the dollar, the price of products continues to rise. Akin to signs of life, artists’ work materials are scarce in Bel-Air.

However, they mention a sense of belonging that obliges them to remain defending this oh so stigmatized district! “Sometimes I get patronized when I say where I’m from,” says Paolo, who has never lived elsewhere. But I know what Bel-Air is worth”. For having fostered a considerable number of public figures like Frankétienne and Coupé Cloué, and because it still abounds in brilliant potential, Bel-Air can only inspire pride, according to him. 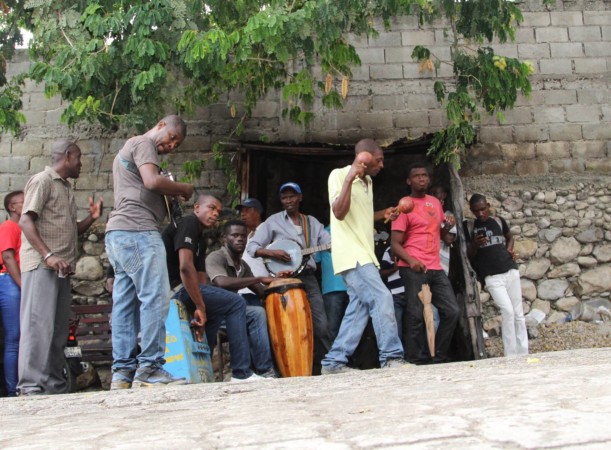 Bel-Air is the district with the highest concentration of artists

Allenby Augustin also sees reasons to be proud of Bel-Air. The area he likes to nickname “the heart of Port-au-Prince” is the most culturally rich district and also the one where the most artists and workshops are concentrated. An opinion strongly supported by Toubi, himself the owner of one of these workshops.

“Bel-Air,” he says, “is the pillar of the cultural center of Port-au-Prince. Between the bann apye, dance troupes, rara groups, and lakou, we feel that popular culture is indeed very present there”. But beyond all of this, the number one workshop called “À trois quart” praises the diversity that reigns in each of the fields. The lakou are then taken as an example.

Bel-Air is indeed very rich in voodoo temples. And in each of them, Toubi praises the fact that we find both the spiritual aspect and the artistic aspect. However, in addition to their primary function, there is a desire that no lakou resembles another. From there, “the development of an artistic line specific to each one, so that there are always as many techniques as there are artists”. 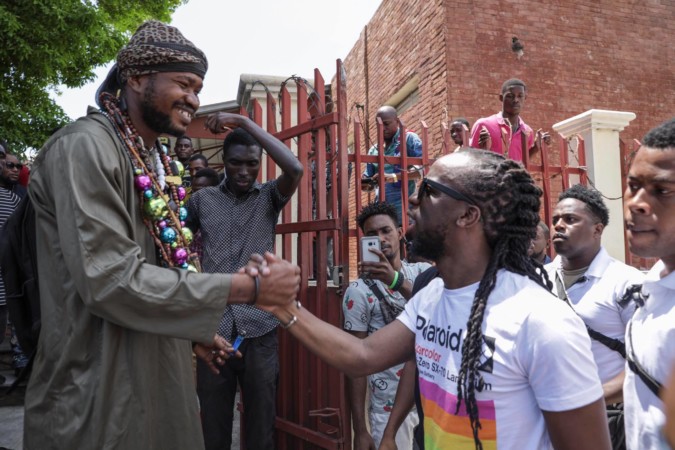 Artist Youssoupha visits Bel-Air, during his visit to Haiti in 2019

Thus, Paolo is a plastician whose technique consists of placing pins on plywood. While for his part, Jérome Clifford carries out sculpture on metal, more precisely based on Coca-Cola caps.

Next to the techniques themselves, what impresses even more is the fact that the latter are not always taught. If these artists organize training for the youth  of Bel-Air in the various workshops, Paolo for his part reveals that he has never been in front of a teacher to learn anything. “Growing up in Bel-Air, I was always surrounded by people who worked all the time. I watched them do it and ended up developing my own style ”.

But despite their expertise, these artistic prospects find it difficult to organize any form of sales activity. Also, the majority of Bel-Air workshops are found to be dysfunctional these days.

“We organized our first big fair in Bel-Air in 2019,” says Interim Director of the Art Center, Allenby Augustin. Since then, no other activity open to the public has been carried out. Because, it is impossible to work in Bel-Air.

Victim of its geographical position

According to Paolo, the instability specific to this district began in 1993 after the elections of Jean-Bertrand Aristide. Or the politician with whom the population of Bel-Air had “an unconditional attachment”. At the height of his 44 years of age, the plastician explains this sentiment in that the Lavalas regime had, among other things, offered a work opportunity to the young people of Bel-Air, the majority of whom had something to do.

But still according to this native of the area, if there is one truth that must be taken into account, it is that Bel-Air is a strategic district for any politician. “Control of several other points must inevitably pass through Bel-Air”. This has brought the population many cases of repression that have gone down in history.

Of all of them, 2004 is remembered as the year during which the episodes were the bloodiest in Bel-Air. “This is the result of choices made by the community which welcomed members of the Lavalas Party that were being persecuted at the time”, says Toubi. Having transformed into a stronghold of resistance, Bel-Air ended up becoming a lawless zone”. A new wave of departures took place. And the prominent people who had already started to leave Bel-Air after 1986 continued their flight.

However, from 2006 to the end of 2019, Allenby Augustin says he remembers a peaceful neighborhood. “During this period, we did not experience too many problems in Bel-Air. We continued to work. This is where we have always stored all of our equipment.’’

Taking as an example his project to promote the work of artists from working-class neighborhoods, the general secretary of Akoustik Prod believes that the population had embraced the initiative very well during all of these years.

The evils of Bel-Air strted again in earnest with the Krache dife gang, according to Paolo. Positioned around Madame Colo, this gang specialized in theft. “The krache dife bandits would arrive with bladed weapons and search those who crossed their path. Once, in rue Monseigneur-Guilloux, they diverted a woman on her way. They forced her to take off jeans she was wearing and her underwear in the middle of the street. It was from this particularly revolting act that we began to look into their case. And because we started to question their actions, they went to war against us ”. 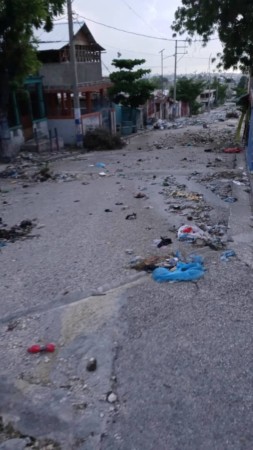 Rue deserte in Bel-Air in broad daylight in June 2021

Krache dife subsequently allied with Barbecue during the pays lock seasons. They substituted bladed weapons for machine guns and other weapons of war, some of which are brought to them aboard brand new Hilux cars, adds Toubi. Armed to the teeth, these men made it so that in addition to being depopulated, Bel-Air now finds itself riddled with borders. The streets of Césars, Fronts-Forts, Macajoux or even Monseigneur Guilloux are described as “bout teren” by the two plasticians. Every living soul is cut down as soon as it allows itself to take one of these paths.

No one was spared

Without faith or law, the krache dife bandits show no mercy to anyone. “They did not hesitate to kill and then burn one of my relatives, deplores Toubi. Suffering from typhoid, he was completely out of his mind when he managed to overcome the vigilance of the people who took care of him. Unfortunately, he headed for one of those streets. He never came back”.

Despite the fact that they are not sons of Bel-Air, Toubi remains convinced that the thugs knew that their victim was ill. “In addition to his language, which was supposed to make them understand this, in this neighborhood, we know how to recognize a person who is psychologically unstable in terms of their rust-like scent. We impregnate our patients with it so that even when they are very clean, we can identify them”. Unfortunately, this was not enough to save him from these bandits who also attacked a priest.

Appointed as the new priest of the cathedral of Port-au-Prince, “the parish priest of Pétion-Ville was to come and celebrate a mass at the Perpétuel”, Paolo informs. The streets in the area were cleaned. The day before the celebration, the Krache dife gang opened fire on the priest as well as the entire cleaning committee. By the cathedral level, they searched the entire roadway to prevent cars from moving ”.

All of these events are known to the authorities. With Léon Charles, Toubi reports having met, as well as other forward thinking people of Bel-Air. The request for a police station in the area was made. This request was approved by the Acting Director of the National Police. “Accompanied by two armored vehicles, the authorities came to set up an antenna. Barbecue opened fire on the police officers who were present. They never came back ”.

To establish his argument, the artist notes that no one can give the name of the Bel-Air gang leader as is the case with Grand-Ravine or Martissant for example. “If there really was a gang, it would have been in G9. The truth is that no one can run the Bel-Air district, due to the strength of character of those who inhabit it and their great ideological diversity. Bel-Air does not tolerate repressive powers and always opposes them. So we come to an attack-defense scheme. In other words, if they do everything to eliminate us, on our side we do everything to stay alive ”.

The alarming insecurity has nevertheless not succeeded in breaking the artistic impetus of the artists. “They continue to create despite the risks of their daily lives,” adds Allenby Augustin, who says he maintains excellent relations with them. Bel-Air is certainly used for political ends, but its artists continue to ponder and discuss art ”.

Demonstrating his desire to send a message, Paolo does not address it to the State, however. “I am no longer talking to the authorities, because this is all part of their plan. And nothing we can tell them will change anything”. The message then becomes that of the people.

“In 2004, everyone demonized Bel-Air because it was the only neighborhood plagued by violence. Today, you can be a victim anywhere in this country. And what is happening in Bel-Air is not far from happening to all of us. It is therefore no longer the time to suffer, but to act. We must all stand up as one against the state. Otherwise, chaos will be widespread. »