Gang violence is forcing thousands of families to flee their homes in Port-au-Prince. However, some run only to encounter brutality inside the various camps scattered throughout the capital

A whole village surrounds her, but the little girl feels alone in the Saint-Yves camp, in Delmas 5. Her days are short. Far too short to delay the night, and with it the repeated nightmare of sexual abuse.

“I cannot speak because my rapist lives in the camp,” murmurs the minor exhausted by the nocturnal rapes, and the constant death threats. 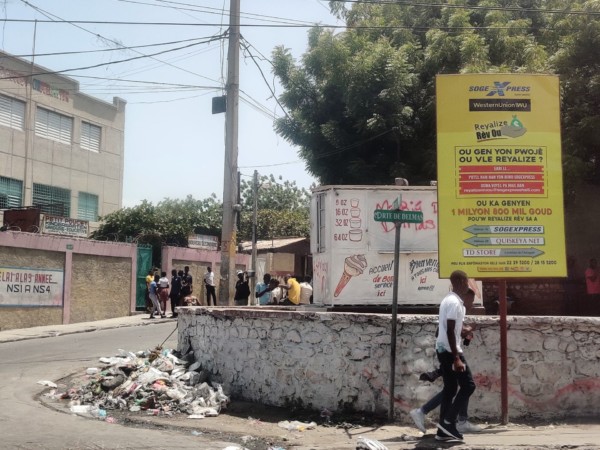 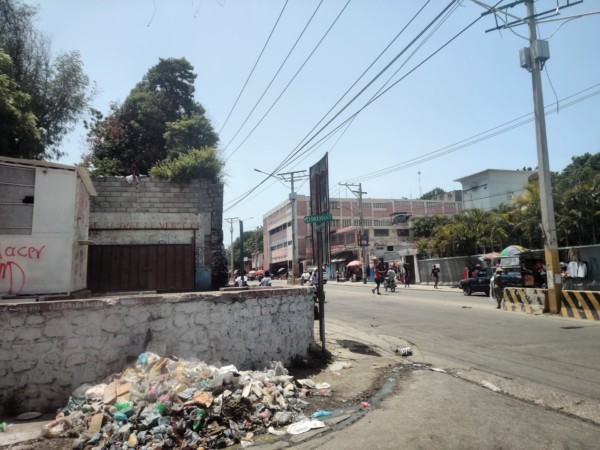 There are more than 1,100 citizens scattered all over the hard cemented courtyard, but also throughout the rooms under construction, without interior doors, of the Saint-Yves Presbyterian Church, which has been transformed into a refugee camp for those fleeing the fury of the gangs since June 14th.

“There are several cases of abuse, especially of vulnerable children,” reports Jules Riclais, member of the western departmental coordination for Civil Protection. 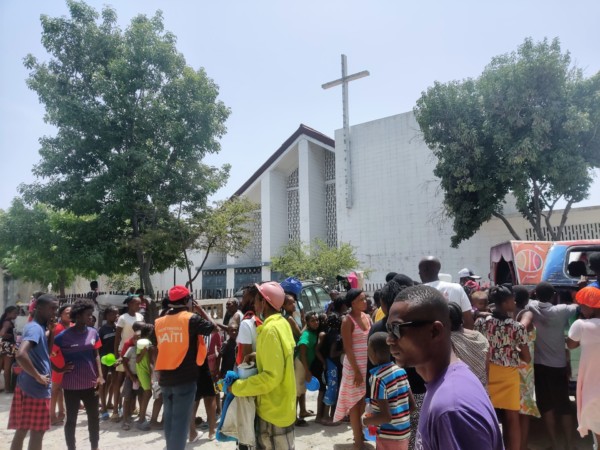 The occupants of this camp come mainly from Delmas 2. Everyone harbors a chilling story, proof of the worsening security situation in recent months, well before the assassination of President Jovenel Moïse.

“The bandits set fire to my house in Delmas 2, and asked me to empty the place,” shares a lady in her fifties. The tornado of violence released on this territory controlled by Jimmy Chérizier, nicknamed Barbecue, took the lives of her two children.

And the situation is getting worse. According to a report released on June 14th by the Office for the Coordination of Humanitarian Affairs (OCHA), nearly 20,000 people are on the list of displaced people in the metropolitan area. 15,500 of them fled their homes beginning on June 1st, the start date of a bloody clash between the gangs of the Martissant area.

With bulging eyes and a deep voice, Hilaire Dufrantz generally has to bend down to address his interlocutors. The 29-year-old handler lives in the Saint-Yves camp with his wife. A resourceful professional, he is pleased at his good fortune, one that many others would have liked to have. A close relative took in his children to care of them after his house was burned at the beginning of July.

“The chief of the zone asked me to leave,” recalls Dufrantz, with a hint of emotion in his voice. “Those who refuse to take up arms and join, must go,” decreed the baron of the neighborhood.

The survivors hardly find any rest in the eleven registered shelters in Port-au-Prince. Saint-Yves is a stone’s throw from the territories controlled by Barbecue, the most powerful gang leader in the country. Fears of a punitive intervention by his henchmen terrorize some occupants of the Saint-Yves parish. 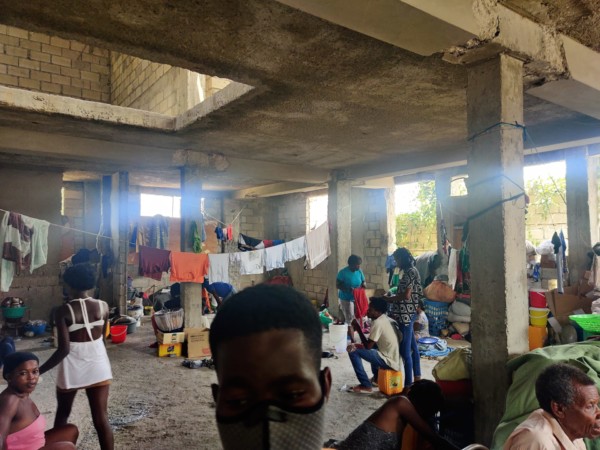 A small van sits right in the middle of the church yard. Surrounded by small plastic bowls, the occupants are busy distributing a soft porridge, intended for children

Hundreds of citizens only have a dozen mobile toilets to use, some dysfunctional. They are installed at the back of the church’s property. Inside, the rooms are transformed into bedrooms without doors. There is no privacy. Women and children lie on the floor, while men come and go, sometimes without a t-shirt to ward off the stifling heat of the shelter.

It is eleven o’clock in the morning on July 22nd. A small van sits right in the middle of the church yard. The two occupants in the rear of the vehicle are sweating profusely. Surrounded by small plastic bowls, they are busy distributing a soft porridge, intended for children.

“They stopped giving us food for two weeks,” complains a lady in her fifties.

In truth, the food arrives randomly. Although the NGOs have restarted distribution three days ago according to a social worker in the camp, the quantity and quality continue to garner silent condemnation.

The republic of NGOs

It is also the NGOs which take over, in support of the almost invisible State, to plan the future relocation of the occupants of the camp.

Public service doesn’t mean much to the citizens here. Already, the authorities have never intervened to support the abused teenager, despite the multiple reports drawn up by a social service professional on site.

“The State has lost its legitimacy, which accentuates its distance from the population,” continues sociologist Roberson Édouard. According to the expert, author of a book on violence in Haiti, “the republic of NGOs” was built on this void.

“To respond to social problems, the State responds either through the social arm or through the penal arm, Edouard analyzes. Since the neoliberal turn of the 1990s, we have not ceased to reduce the social arm to its simplest expression. At the same time, external aid has turned away from direct support to the Haitian state and has turned to NGOs and international organizations.”

In return, direct aid to the criminal arm of the State has increased over the past fifteen years. Therefore, we find ourselves with “NGOs to heal the wounds of the plebeian population; the prison and the police to keep her in docility and submission. However, the judicial system remains dysfunctional, despite the multiple investments of foreign donors.”

At the camp of the municipal school of Pétion-Ville, the croaks of the drama unfolding in Saint-Yves play out on a different tone. Classrooms now occupied by motley mattresses, wheelchairs and crutches tell of the special needs of many of the 556 occupants of the site, sometimes requiring the help of sign language professionals to answer journalists’ questions. 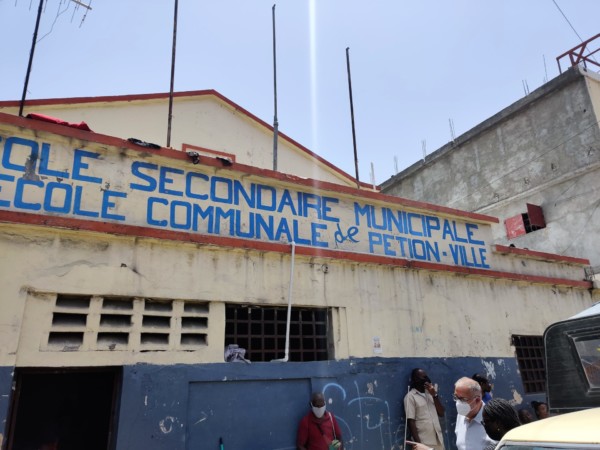 Samuel Jean leans on a cane. In order to move around inside the establishment, the visually impaired man taps on everything to make his way among people and things.

The street musician remembers with precision a particular day, back in mid-June, when the La Piste camp in Delmas turned into a battlefield between bandits and police. The hundreds of occupants of the space, among them people with reduced mobility, were sandwiched in. 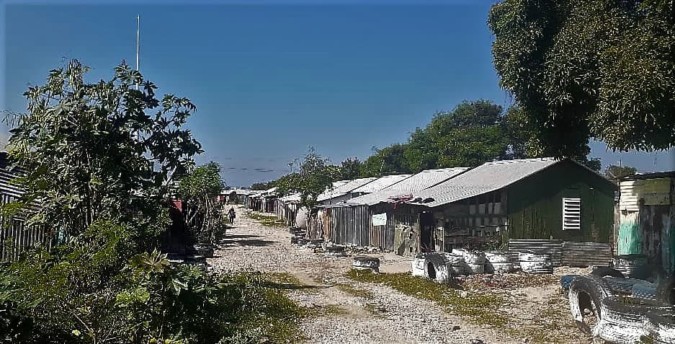 Distraught by the powerful detonations and the smell of tear gas, Jean, 32, fled in pitch darkness. He fell. Got back up. He fell again, this time into a pool of water, and hurt himself. “I lost everything except my national ID card,” he says.

“I am absolutely certain that the police set my house on fire,” Jean fumes. His testimony resembles that of several other refugee from La Piste. This camp built by the Red Cross after the earthquake of January 12, 2010 was on the way to becoming a den of gangs. This is why the police decided to take matters into their own hands, causing collateral victims within the population.” 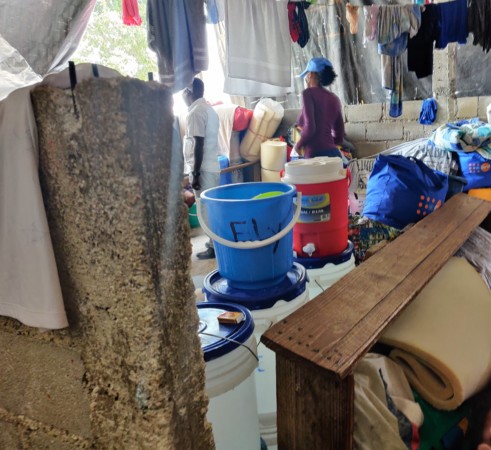 These makeshift camps, erected without a real urbanization plan, are nothing new in Haiti. They were found everywhere in the metropolitan area of Port-au-Prince, the day after the  January 12 earthquake.

The slums originated from the rural exodus in Haiti. On the other hand, the encampment system concerns people already in the city, but whom, following natural disasters, recurrent waves of violence, move to settle elsewhere, forming camps as “an emergency living arrangement,” examines university professor Dr. Prince Neptune. “Leaders will emerge because of the need for security, control and protection. To express themselves and establish their legitimacy, they will start to commit violence.”

At the parish of Saint-Yves de Delmas or at the municipal school of Pétion-Ville, the political upheavals of the last few days, the scrambling initiated by Claude Joseph, Ariel Henry or Joseph Lambert to control the State, or the burial in violence of Jovenel Moïse is of little concern. “We are used to participating in elections, but nothing changes for us,” spits Hilaire Dufrantz. 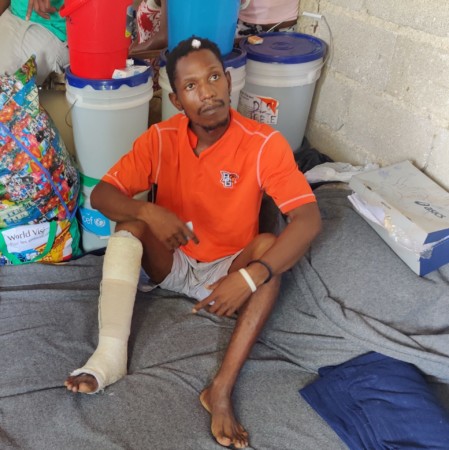 John Sully Saint-Louis is deaf-mute. Without having heard the detonations, he was hit in the leg. He escaped from Camp La Piste thanks to a friend. The police were going after him because he couldn’t hear them.

The man had high hopes for the presidency of the leader of the Haitian Party Tèt Kale (PHTK). “We are in this condition because of him, he said. If he had not armed the bandits and created the G9, we would be in our neighborhood today, we would not be in this miserable situation”.

Despite everything, Dufrantz, like others in the camp, considers a happy future within the realm of possibility. “The only way to see change is to build a government that loves and thinks about the welfare of the people.”