Smoked herring is a fish imported from New Brunswick, Canada. 90% of factories in Cap-Pelé, a city in the region, work almost exclusively for Haiti according to figures released by the Canadian Broadcasting Corporation (CBC) in October 2015

Even though it has been in Haitian cuisine for decades, smoked herring is a dish that divides. Some hate it, some tolerate it in some specific dishes, while for others it is an essential food that enhances the taste of recipes.

Aside from these personal preferences, the issue of social class is important when it comes to this fish. For many, it is food for the poor despite all its health benefits.

Baptiste, Calastery has seen the herring in almost every dish throughout his life. His family had made it a key part of their cooking. “At one time, I even thought it was an essential ingredient like salt” says the philosophy student.

Smoked herring is also a delight to Guerrier Nathanaël and Baptiste Adolphe’s taste buds. These two young entrepreneurs sing the fish’s praises. They own “Pizza Pam” in Juvenat. “Whoever has never eaten pizza with herring has never eaten pizza”, they blurt out in a proverbial tone. For them, it is inconceivable that people would disdain this salted fish.

But their enthusiasm is not shared by all. Jenny, 25, does not see herself using it regularly. For her, the strong smell of this fish and its bitter aftertaste automatically disqualify it. She only eats it if it is turned into “chiktay”, a recipe of crushed smoked herring spiced with chilies, which is served as a starter at certain parties.

It’s pretty much the same for Christina, born in the rich town of Pétion-Ville. However, more flexible, she consumes herring for “the more pronounced taste that it gives spaghetti and macaroni” when prepared according to Haitian cuisine.

Beyond these considerations of taste, the herring is a mirror to deeply rooted social prejudice. According to Jean-Pierre Poulain, a French sociologist “eating behavior has symbolic significance […]. From a psychosocial point of view, to eat is to ‘consume’ symbols.”

In the 326th edition of the monthly magazine “Economic Alternatives” published in 2013, the food sociology expert affirms that “eating, how we eat, and the nature of what we eat have more significance than the calories brought to the body”. This is why it is more important to understand the significant value a given society places on a particular eating behavior, including the notion of social class.

“Only the poor and dogs eat herring”, says Lesly Clarens, a sociology major, referring to what he is used to hearing. “The worst is it is the poor who propagate this idea” he thinks. This degrading construct and discourse are linked to education. “In the mind of Haitians, especially poor Haitians, the more they pay for something, the more they value it” says Clarens.

Indeed, herring is a very affordable food. This is why Nathanaël thinks that if it were less accessible to the needy, it would not be so disdained. “If the rich can afford it in bulk, the poor can buy a piece of it with only ten gourdes (less than one US dollar). And so, as opposed to other seafood such as lobster, smoked herring is for the poor the easiest to find. However, there is no difference between the herring consumed by the poor and the one consumed by the rich”.

For Christina Louis, a law student, those who refuse to eat herring are those whose standard of life improved. They think that admitting to the benefits of herring will make them loose credibility.

Smoked herring, commonly called “aransò” is a fish imported mainly from New Brunswick, Canada. 90% of the Cap-Pelé factories, a city in this region, work almost exclusively to export to Haiti, according to numbers provided by the Canadian Broadcasting Corporation (CBC) in October 2015.

The main advantage is the way smoked herring is prepared, which allows it to be stored at room temperature. In 2017, the president of Cap-Pelé Herring Exports, Mario Cormier, explained the process to Canadian television. “To preserve and keep the fish cool, we add salt and then put them to wooden sticks. At the end of the day, they are hung inside smoking rooms. Generally, they spend about a month there to dry”. 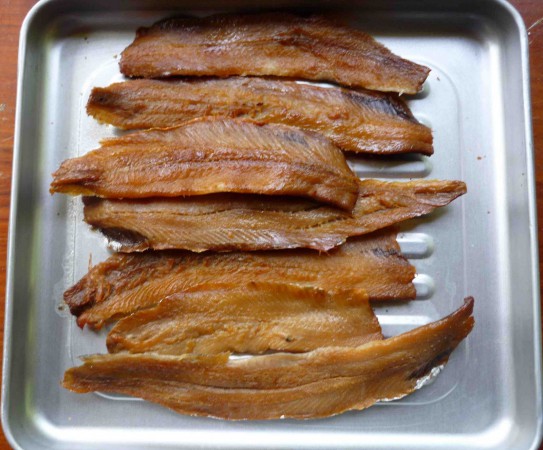 Given that access to electricity is still a problem, this is a plus to the Haitian market as the fish does not need to be frozen. As a result, Haiti and the Dominican Republic represent over 75% of the Cap-Pelé Association of Herring Exporters’ market.

Herring is a good source of vitamins. “It facilitates children’s learning” according to Julien Dimitry, a schoolteacher. Jackson Toussaint, a resident doctor at the Hôpital universitaire de la Paix (a public hospital in Port-au-Prince) confirms this. “It’s a source of iron, vitamin D, B3 and B12” explains the doctor. Smoked herring is recommended for pregnant women because it ensures the proper development of the fetus. And besides that, it is rich in Omega-3s which enhance blood circulation.”

Some artists are not innocent in spreading negative clichés about herring. It is true that prejudice against this fish existed long before them, but according to Lesly Clarens, rappers like Wendy come to consolidate them. “In the song Pa gen nivo pou mwen, Wendy links his change of social class to the fact that he no longer eats herring, but chicken”.

If the sociology student is not sure that the elite despise herring, he is nonetheless certain that fans want to resemble their idols as much as possible. One of the ways to do that is by following what they say and do.

Other elements perpetuate this prejudice, and they are certain expressions and swear words. To remind a person that they are thin, they are called “aransò nan sewòm”. We call them “tèt aransò” to make them understand that they are ugly. If a woman refuses the advances of a rich man, he can tell her that she is being capricious while he is trying to help her so that she will no longer have to eat herring.