Seven men subjected Sara to the worst abuse of her life. She lives with an acute infection, incapable of caring for herself. She is only nineteen years old

It was two in the afternoon when seven men burst into Sara’s room in Cité de L’Éternel. Hooded and heavily armed, the bandits broke down the front door, invading the small house, and started an intensive search of the two rooms in the impoverished neighborhood of Martissant in the south of Port-au-Prince.

“Where have you hidden the money?” Screamed one of the men, while the others ransacked through the few pieces of furniture.

The nineteen-year-old girl panicked. Her mother had gone to market, leaving her in charge of a five-year-old. She was under no illusion: “I thought that they were going to kill me.”

The search was fruitless. Sara then hears the angry shout of “Mandan Chrisla.” This is a dangerous accusation shouted by the gangs of the Village of Dieu insinuating that the women in the area controlled by Chrisla are accomplices of the notorious criminal.

Immediately, six of the robbers line up. They will put Sara through the worst nightmare of her young existence. Smiling, the seventh filmed the scene with his cell phone. He is also the one who asked his accomplices to leave, after seeing that the young girl was heavily bleeding.

“Today, gang rape is almost normal in the areas controlled by the gangs,” declares Marie Rosy Auguste. “There is no consideration given for age,” continues the head of Programs of the National Network for the Defense of Human Rights (RNDDH). “We have registered cases of infants and women over 60 years old”.

In addition to sexually transmitted diseases, community rejection, aggressive infection, there is another danger to the victims,” reports Auguste: ”Many children will be born without the possibility of knowing their fathers.” 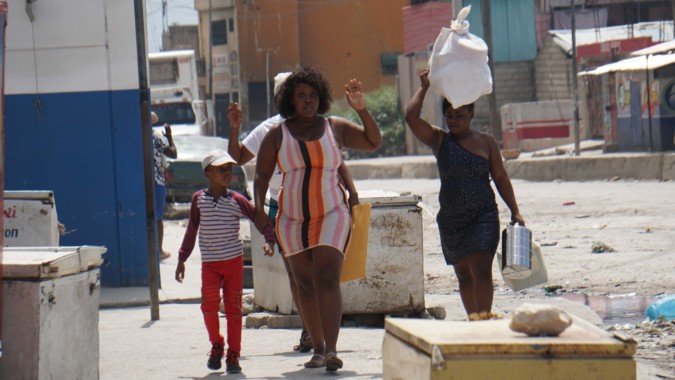 Gangs have been terrorizing Haiti for the last three years. According to reports, these groups, which are armed to the teeth, control about 30% of the territory. They have conducted more than thirteen massacres and armed attacks, particularly in neighborhoods opposed to power in place. According to RNDDH, a human rights organization, thirty-three women and girls report having been victims of gang rape. This count is clearly an underestimate since it is based only on cases that are self-reported.

Since inter-gang warfare started in Martissant in 2021 more than 15,000 citizens have fled according to the United Nations Office for the Coordination of Humanitarian Affairs (OCHA). In the entire metropolitan area of Port-au-Prince, there are more than 19,000 refugees. Thousands of them are now in shelters which are under equipped and poorly provisioned.

In this environment of extreme violence, women and young girls pay the highest price. They find no rest inside the provisional shelters as there have been multiple cases of sexual violence reported in them.

That Wednesday of November 2020, several houses were set on fire in the area boarding the scene of countless sexual aggression in Cité de l’Éternel. Help arrived, not from the National Palace, but from the dangerous gang of Petit Bois.

From that day on, Sara has not lived in that neighborhood. But the incident left its mark. She was stricken with a terrible vaginal infection immediately afterwards. She went to the hospital of the State University of Haiti the next month but the doctor who treated her insisted that she have blood work done at a lab that he designated. That lab charged a total fee of 3,500 gourdes ($36), [equal to more than six-days wages at the minimum wage of 550 gourdes ($5.68) per day], an amount far out of Sara’s reach. 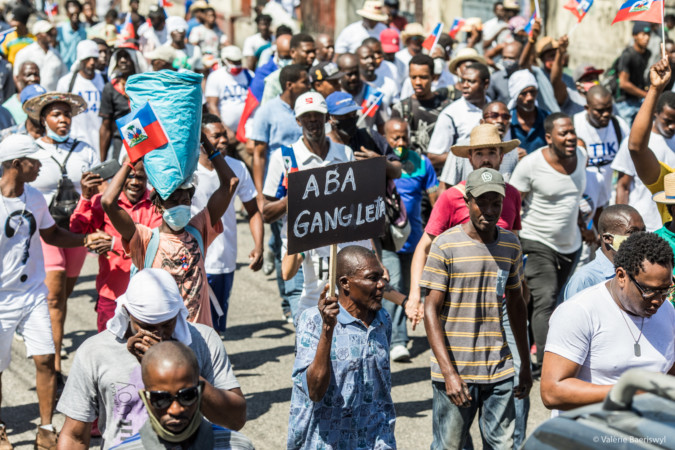 Demonstration against insecurity and dictatorship on February 14, 2021. Photo: Valérie Baeriswyl

Unable to gather the required amount, Sara’s mother, Leonne, had the tests done near the University Hospital. The doctor refused to consider the results. Sara went to the hospital again last June, after she spent months in the streets selling small pieces of jewelry. “The infection has lasted right up until now, despite prescription medicine,” said Sara, incapable of having surgery due to lack of money.

Leonne has somehow turned dust into a livelihood since the death of her husband on an ordinary Monday back in March of 2004. The small family, living in Petion-Ville, had just finished eating. Sara’s father was singing and playing with his daughter when they heard repeated blows on the front door. Armed men rushed into the house and snatched the man away from his family. They later threw his lifeless body, having choked on his own vomit, on a pile of garbage near the local market. Even today, the reasons for this killing are not clear.

“Lacking the means, we sought refuge in Bel-Air, then at an aunt’s house at Cité de L’Éternel in 2014,” Sara explained. “I heard people say that the people who live in the slums are all thieves but that is not true. Some people live there because they are unwilling to raid other people’s homes.

It is affordable rents in Bel-Air, another slum, that also attracted the Desroches sisters, originally from Cap-Haitian. Two days before Christmas, last year, at about nine at night, a volley of gun fire ripped through the neighborhood. The older Desroches sister, 32, made a run for it, followed closely by her 15-year-old sister. An armed man intercepted the teenager. The next time she saw her little sister was at a local school in Bel-Air which was turned into a refugee camp dedicated to victims of violence.

The youngster had come to Port-au-Prince to benefit from the fruits of education. She was brutally abused by an unknown assailant.

“I am often overwhelmed with sadness. I cry a lot,” said the youngster. She is wearing a pink t-shirt, a multicolor bracelet, long braids and has a small star painted on her arm with a blue pencil. 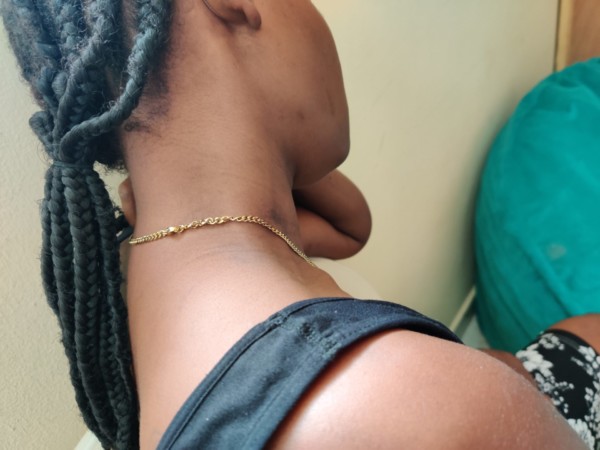 Passers-by make frightening gestures towards her! She was hit by a bullet in the neck. The bullet came out in her back. Photo: Widlore Mérancourt

Sometimes, violence roams the streets. Mirlaine Dorsaint remembers the day: it was a Saturday, last April. The young woman was going to buy merchandise for her small business when heavy detonations set off a panic in Martissant 2. Already a mother of two at the age of 21, Dorsaint searched for shelter. She ended up having to cross over three dead bodies. Some who saw her made frightening gestures towards her. She had been hit by a bullet in the neck. The bullet came out in her back.

The gangs continue to sow terror in the poorer quarters like Martissant, a few weeks after the stunning assassination of the President of the Republic, Jovenel Moise, in the bedroom of his private home in Pelerin. The victims find almost no support from the State which has already failed to assure their security. 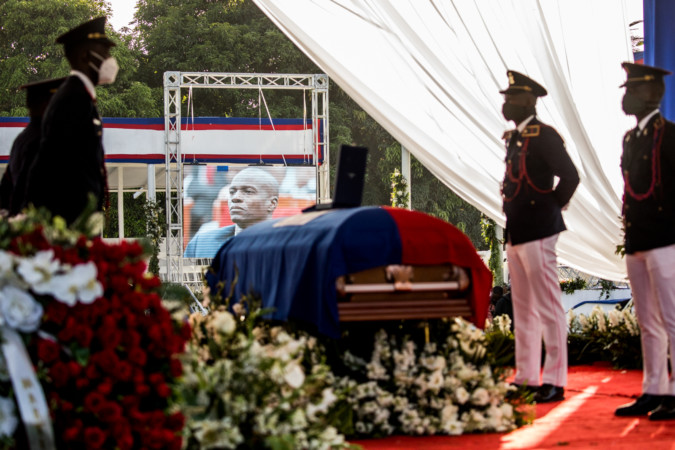 Peterson Antoine collaborates with RAPHA International, an NGO working on the prevention of trafficking and sexual exploitation. “I have been doing humanitarian work since 1994, but I have never before lived in such a situation,” he said. RAPHA supports 130 victims of sexual violence from La Saline, Village de Dieu, Cité Soleil and Carrefour Feuilles. Six of the identified survivors are 14 years old and the great majority come from Martissant. About 20 of the families—among them those of Dorsaint and Leonne—have been relocated elsewhere in Port-au-Prince at the expense of the NGO.

“The bourgeoisie and the state distribute arms in the ghettos, and it is us, the poor, who pay for it”, seethes Sara. “No area in Haiti, rich or poor, is better than any other. We are all unsafe. We need to disarm the disadvantaged neighborhoods and provide work for young people.”