Maritime transport is now threatened: bandits accost ships filled with goods and take everything in their wake

One o’clock in the morning on May 1, a light spot appeared to follow the thirty passengers of the boat Mèsi Manman on the sea of Léogane. The large wooden boat smelled of fresh fish, carried in large plastic containers. The crew was going to Port-au-Prince to sell seafood and foodstuffs before returning to town with other goods such as rice or fuel, which are difficult to find locally.

The two engines of Mèsi Manman were humming to the maximum, but not enough to create a distance between them and the persistent light, which gradually revealed a shape, a small motorboat and its four heavily armed passengers. “Stop the engines, or we will shoot you,” shouted one of the men, wearing a hood. 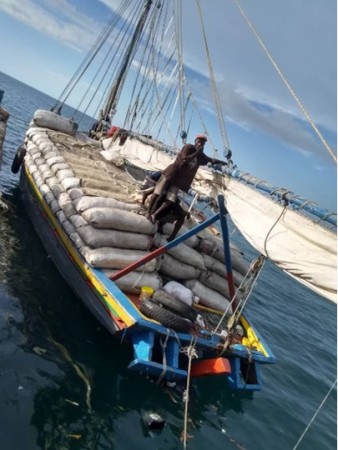 As the captain of the Mèsi Manman followed these orders, the gangsters threw a rope with a strong hook at the end of it onto the boat, immobilizing both vessels. And immediately, two of the masked men boarded the Mèsi Manman. They methodically searched the passengers and took everything onboard: bundles of money, telephones, suitcases, as well as the two engines of the boat, according to three witnesses on the scene who spoke to AyiboPost.

The “piracy” of Mèsi Manman leaves the Madan Sara overburdened and in shock. “We are recording more and more similar cases, mainly in the bay of Port-au-Prince,” said the president of the Haitian Coast Guard, Commissioner Jean Pedro Mars.

Three of the four boats operating on the Corail – Port-au-Prince route have already been attacked at sea. Most of the incidents reported to the authorities end up in reports: no concrete action is taken to help the victims of this growing insecurity. “We don’t have enough equipment or fast boats to respond to crime scenes,” says Jean Pedro Mars. “The authorities are aware of this, but land-based insecurity seems to be the priority,” he adds. 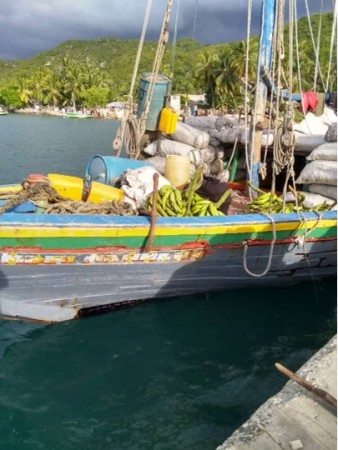 Criminal groups are spreading almost everywhere in Haiti. Last June, 3,900 people were forced to flee their homes in Cité Soleil because of a gang war. In this case, rescue workers counted more than 200 dead, not to mention hundreds of rapes, dozens of disabled people, and the missing.

The Port-au-Prince metropolitan area, the center of political and economic activity, is increasingly isolated from the rest of the country. Gangs are locking down the most important roads, preventing the free movement of goods and people, to the south and to the north.

“A maritime option is essential, as the gangs control over the roads out of Port-au-Prince continues to progress,” argued the Australian, Madeleine Habib, this Friday. According to the maritime officer working for the World Food Program in Haiti, this situation applies particularly to the population of the south of the peninsula, which is still suffering from the impact of the earthquake of August 2021.

The coastal trade is a lifeline for the farmers of Corail. Any suspension of business means a loss of goods and an even more drastic increase in the price of imported products in the locality of peasants and fishermen of barely 20,000 inhabitants, devastated by the cataclysm.

A year after burying six dead and bandaging 244 injured, Corail cannot provide permanent shelter to thousands of its residents. The plastic tents give the impression of an open air mushroom garden. Five of the seven schools that collapsed in the earthquake still function under tents.

“Boats allow people to work and earn money, says Alex Maxcia, Corail’s chief mayor. If they stop working, the town will die. Hunger will increase. And there will be many more cases of insecurity.”

Since the attack, Mèsi Manman has scaled back its operations. Its owner, Jean Raymond Lormilien, has cut the number of trips in half. But stopping is not on the list of options. The father of seven children must pay back the money entrusted to him to purchase goods in Port-au-Prince, taken away by the gangsters. From now on, he rents two engines at 30,000 gourdes per trip for his operations.

“I saw death in front of me, recalls Lormilien. We were able to reach Port-au-Prince with our sails.”

Everywhere on the boat, the shock was evident. People started crying after the bandits left, said Savelhomme Antoine, one of the sailors on the Mèsi Manman. Some peasants got sick and refuse to go to sea these days, says the 43-year-old father of three.

One year after the earthquake, the Grand’Anse department is struggling to recover. According to Silvera Guillaume, head of civil protection on site, the aid offered by NGOs is not up to the needs on the ground.

About 5,000 families are still living under tents, in a context of food insecurity, lack of reconstruction of most roads, and schools having collapsed.

“Agricultural production in the area has decreased significantly, says Cassendy Charles, emergency program manager at Mercy Corps. Since Hurricane Matthew in 2016, the area has not reached its previous production level.”

In the long run, the very survival of communities is at stake. This thought haunts Jean Raymond Lormilien. “If the land is blocked, the sea is blocked, the department will perish,” he concludes.