Winderson Jean-Charles is a former student of the Collège Canado Haïtien (CCH). The school, located in Turgeau since 1969, requires young boys to regularly shave their hair. However, Jean-Charles says he never experienced this constraint, and he was not the only one.

“There was another student who looked like a person of mixed heritage, not only because of the texture of his hair but also of his skin color, says the former student who completed high school in 2015. The members of the administration kept telling us how much they liked our hair, which they thought was too beautiful”. 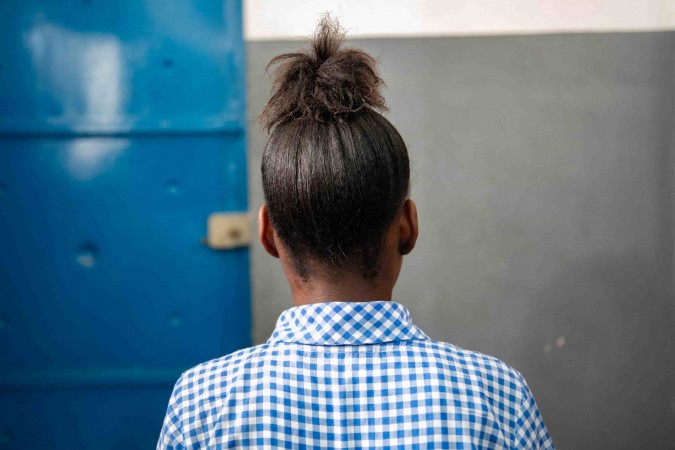 Many schools in Haiti, impose restrictions on kinky hair. ” [Kinky] hair is more difficult to style as it grows and isn’t very much to look at”, explains the director of the Mixte Union des Cœurs school, Anne Sydoma Zamor Vilpigue.

One of the most common situations she encounters is parents who are too busy to attend to how their children leave for school. “So, these students sometimes arrive with their hair uncombed”, she complains. “And even when they really aren’t, their hair looks to be dirty”.

However, the standard does not apply to everyone. “If you have very kinky hair, reports D.J., a student at CCH since 2016, principals will put more pressure on you to cut it because it looks uglier to them, compared to other students’ hair which is silky or curly”.

The Martinican sociologist Juliette Smeralda sees this negative attitude towards kinky hair as a rejection of this type of hair. To support her argument, the author of “Peau noire, cheveu crépu” goes back to the colonial era, in an interview with AyiboPost. The problem, according to her, arises with the clash of civilizations, when the European who describes himself as White enters the territory of the Black man with arrogance and hostility and then looks at the kinky hair with horror and contempt.

Often, school leaders break the rules that they themselves have established. This is the example of a teenager of Dominican nationality who attends the Collège Classique d’Haïti. He is allowed to keep his hair longer than the others “because it is different and it can get damaged”, the school’s director, Wesner Jean-Michel, told AyiboPost.

This problem dates back a long way, the sociologist analyzes. “Blacks who are leading institutions today are [sometimes] the substitutes for Whites in the plantation era”. They run institutions that sometimes date back to back to colonial times. That’s why they’re going to have this propensity to “force their peers into a body that is not their own”. 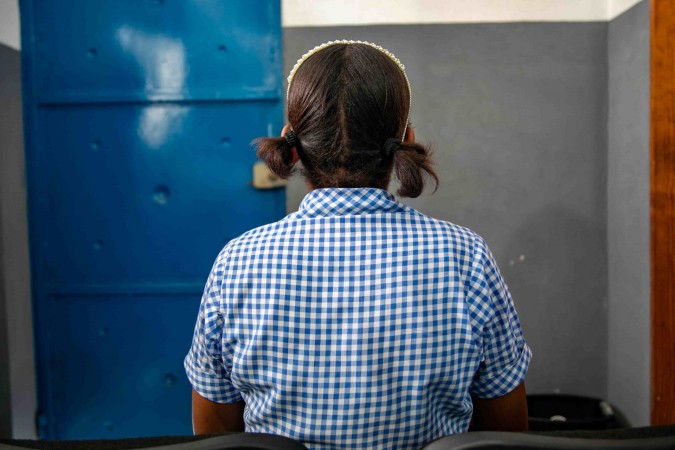 For girls in schools, the afro is the restriction that comes up the most. It is a symbol of cultural identity. In the 1960s, the Afro was adopted by the protagonists of the Black Panther anti-racist movement. It was a symbol of protest, especially politically, during racial segregation in the United States.

But on this point, an official of the Notre Dame de Lourdes school says: “you need a certain look that the afro does not bring to the uniform”. The person in charge, presented as the school’s director by the gatekeeper, agreed to receive AyiboPost during a visit related to this article. She preferred not to reveal her name. “Giving the impression of being disorderly”, she adds, “the natural state of hair should be kept for the home. And it is in the school code”.

The director of the Mixte Union des cœurs School, Anne Sydoma Zamor Vilpigue, does not accept that her students have an afro either. “Otherwise, the girls will not be able to wear the ribbons which are indispensable”.

Vilpigue says she chooses “classic” hairstyles. This term is used by three school officials contacted for this article. But it is impossible to have a definition. The director of the Collège classique d’Haïti tries to relate it to the “traditional” hairstyles generally made with “gogos and barrettes”.

“In nouveau secondaire 2,” remembers Vedette Cadet, “I almost lost an exam because that day I made chichis“, which are bangs made up of small braids that rest on the forehead.

For that alone, the young girl found herself outside pleading with members of the administration, while the other students were taking their exams in the classroom. She was finally given a chance almost half an hour later. But when she was handed an exam sheet it had “minus ten points” inscribed on it. 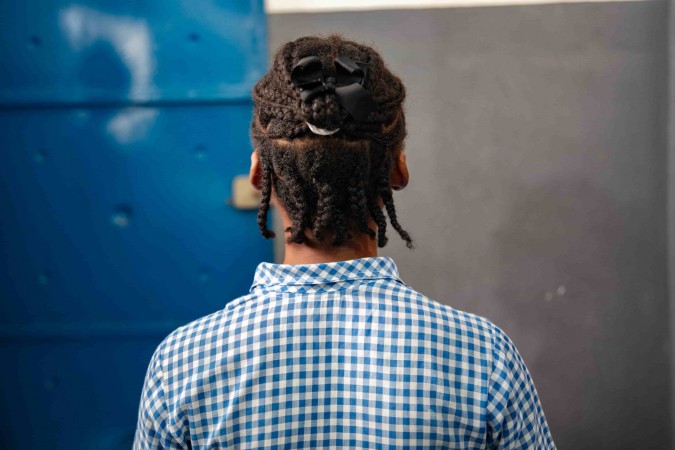 A committed feminist, Vanessa Jeudi confirms that she has also been through this. In high school, she liked to wear multiple braids because “I found they fit me better”, but the members of the directorate refused each time she kept them and preferred the wearing of hair extensions.

A school that forbids the mother tongue, that does not accept a hairstyle that is in concert with its values and identity… Jeudi believes that this must be taken seriously, because “we are moving towards a type of society that takes us away from who we are”.

At Antoine Georges et Izméry High School of Petite Place Cazeau, the hairstyling rules are strict. Wash and go, braids, all forms of hair extensions, and especially afros are prohibited. “As soon as a student shows up with one of these hairstyles, she has the choice of changing her hairstyle or going home”, says Vedette Cadet, currently in nouveau secondaire 3.

To make sure that the guidelines will be respected, the school’s teachers use different methods. The Collège Canado Haïtien has set up routine controls. And it works, according to D.J. The teenager says he was sanctioned during the last one that took place.

Then, the director would have taken his agenda in which he mentioned his infraction which consisted in having too high kinky hair.

The people in charge then go through the school’s system to reduce the disciplinary grade of the sanctioned student,” explains D.J. “This grade, tantamount to the grade point average is crucial in determining whether or not the student will be admitted to the next grade. In other words, the student may have successfully completed the academic year based on their grade point average, but not be allowed to continue because of this disciplinary grade”. 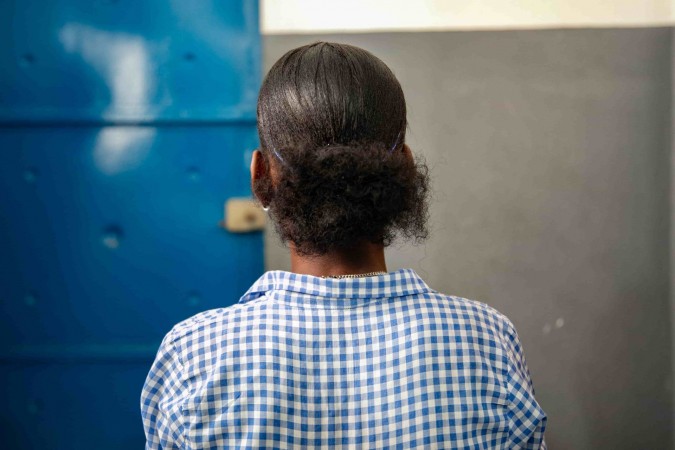 Some explain the imposition of these rules because the students are expected to professionally attend restrictive spaces in the future. Without making a comment on the beauty or ugliness of the hair types, Wesner Jean-Michel, director of the Collège classique d’Haïti, supports the imposed restrictions. There is no real reason for this other than a question of know-how,” he says. While not all students are affected, many will work in environments that require this protocol. So, it’s important to teach them how to handle it now”, he adds.

These impositions have a significant impact on the mental health of children and youth. ” Comments about students’ physical appearance can affect their self-image, especially if they are made in comparison to other children”, says psychologist Joanne Landrin.

The child feels good if his image is correct. “However, if we are given the impression that his image is not good compared to others, he will grow up with a negative self-image”, continues the specialist.

Some school officials are making concessions. At Sainte Rose de Lima High School, for example, “we accept natural braids as long as they are not worn for more than three days”, informs Franz Dell Anne Borno in nouveau secondaire 1.

If parents don’t have time to do their children’s hair every day, says Anne Sydoma Zamor Vilpigue, “they can braid their girls’ hair. However, these braids must be tied with ribbons”.

Wesner Jean Michel says that he has no problem with dreadlocks and that the girls of his school wear their afro as long as they are no longer at the elementary level. But, qualified as holiday hairstyles by other institutions such as Notre Dame de Lourdes College, they are not accepted under any conditions.

Photos by Carvens Adelson for AyiboPost